Dandy People > Blog > Agile > Architecture or What is Love?

Imagine ten architects in a room.

The first thing they would discuss is: “What is architecture?”, and they would use all the time they have at their disposal.

If no one comes into the room and yells at them that they have to create a target architecture, a guiding principle or anything that helps the teams solve a technical obstacle that stops all delivery in the release train, they will continue the discussion.

The first architect will say that there are standards and you should not reinvent the wheel.

The second architect would state that there are several standards and which one should you comply with?

The first architect would argue that ANSI is the one and only, that states that it’s all about organizing a system, its components and how they relate to each other and the environment.

The second architect would say that ISO is the preferred choice because it focuses more on the properties of the architecture’s elements, relationships and principles of its design and evolution.

At this time, the third architect would state that there are thought leaders out there like Gartner.

The fourth architect would interrupt and refer to the Zachman Framework from the 80s and that there are some really good nuggets there.

“Domain-driven architecture”, the fifth architect says and then the argument is in full bloom.

Until the sixth architect, the veteran who will retire in six months, says: “OSI Model. If it’s not broke, don’t try to fix it”

“Anyway”, says the eight architect, “architecture is easier to understand if we use metaphors. Architecture is like a garden. If you don’t take care of it, it will grow freely and become chaotic. Entropy is a natural law that takes over”.

The seventh architect, still trying to understand why everyone didn’t appreciate SAFe, says: “it’s more like a runway where the code can land. You cannot build the runway while you are landing”

“That metaphor is lame”, says the ninth architect, “its better with train tracks that the train travels on. It’s a parable everyone understands.”

“Or the road railing that you have to stay within on the highway” says the first architect. “Otherwise you collide. Not everyone lands planes or is a train driver. On the other hand, many have driven a car and can relate.”

“No, it’s more like a pop song” says the second. “You have three chords that you can combine so that everyone can sing and dance along.”

“More like jazz where you can improvise once you have experience and have all the theory”, says the third.

“Or a classical ensemble where everyone plays an important part, and it’s only when all is combined that you hear sweet music”, says the fourth while the fifth, sixth and seventh nod in agreement.

At this time the tenth architect, who has been quiet until now, would clear his voice and say: “Architecture is like love”, and all other nine architects turn their attention to him and listen.

“No one can define it, but everyone knows how it feels. Emotions flow, you walk on light clouds, nothing is impossible, no obstacles are in the way and you can conquer the world!”

“There you have it!”

All architects give their acclamations and raise from their chairs and start clapping and dancing with stiff movements.

Suddenly there is a brisk knock on the door to the conference room. One of the architects opens the door but closes it again.

“It was just a product owner who wanted help to increase value flow. But we need to discuss what architecture is first”.

Now, there’s a knock on the door once again. This time it’s the CEO who rushes in.

“You are all fired if you don’t help!”

And there’s an unprecedented energy and movement in the room. The architects realize that they don’t have all the time at their disposal to continue the discussion.

“But … “, the first architect says, “When can we talk about value? Architecture is not an end in itself”

“Now!” shouts the CEO and they stumble out of the room, down from the stairs from the 24th floor down to the basement and the development teams.

“We need a flexible structure”, says a developer. “It should help us here and now, but at the same time be ready for future needs.”

“A flexible structure …”, says an architect.

“That needs to be developed now. Not too early because we still don’t know what to build. Not too late because then we need to create ugly hacks and workarounds and contribute to the already infinite mountain of technical debt.”

“A flexible structure…, which is produced just in time…”, the architect continues.

“And it should be a structure that helps us create value”

“There we have it: Architecture is a flexible structure, created just in time, to enable value flow”

“Or perhaps just helps us save the company”, says the CEO 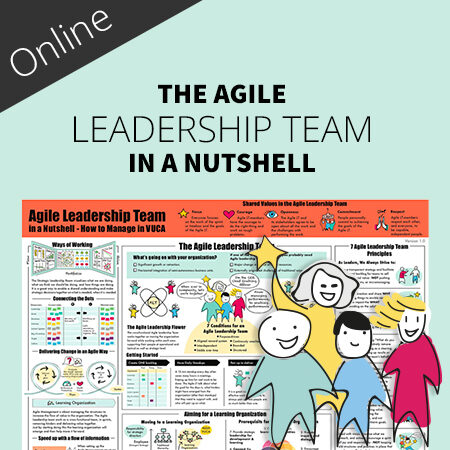 The Agile Leadership Team in a Nutshell Course – Online
Target Group: Executives, Managers, Employees, Associates in all functions across the organization, everyone who belongs to a team, and you who also support teams, in an Agile organization.
Read More & Buy this Course - 150$